What is the Air Cargo Management ?

Air Cargo Management course provides a comprehensive and lively overview of the air cargo industry, which is both economically and strategically important in the field of logistics, world trade and supply chain management.

This new edition builds on the success of the previous edition, focusing on the role of air freight in the global supply chain, including areas such as: the main players in the industry; regulations and restrictions; and terrorism management. Updates to this course include,

the role of E-Commerce and its changing influence on the industry; a new chapter on crime, security and terrorism; updated case studies, and new contributors providing professional insight from the industry.

Enriched throughout with international case studies and contributions from industry experts, Air Cargo Management provides a practical approach. It is the perfect companion for students planning to work in airlinecargo departments. Professionals and managers in the field will also find Sales’ easy style and industry insights useful and applicable to their practice.

Air cargo management is one of the important sectors of aviation today. There are several cargo airlines that have dedicated themselves to the transport of Air cargo. Some cargo airlines are divisions and subsidiaries of larger passenger airlines, these cargo airlines carry cargo over long distances.

Today because of the time constraint, Many people are opting for air cargo rather than freight movement by surface. Hence, this has led tremendous growth in the air cargo market worldwide in larger airports. There will be a separate cargo terminal. The cargo terminal will have two areas, the first Booking area, and 2nd Delivery area.

There are two types of air cargo – General Cargo and Special cargo .

General cargo : This type of service includes high-value goods, such as electronics, jewellery and pharmaceuticals. Air cargo freight is more expensive than shipping by sea, but is usually less in price than the Special Cargo service.

Special Cargo: Items that fall under this type of service usually require to be handled with care.

Types and nature of Cargo The following are the different types of cargo and its nature : General Air Cargo. Any item that does not have to contain liquid. such as Sigrid’s, engineering goods, machinery, leather goods, etc. comes under general cargo. General cargo has to be packed and labeled properly. Indicating the details of destination, number of pieces, etc. Precious Air cargo This type of cargo includes diamonds, gold jewelry, gold bullion, and currency. Livestock Domesticated and Undomesticated animals can be sent as cargo. The most common animal that travels in the air is a dog. Dangerous goods Dangerous goods mean cargo by which it’s nature or preparation may involve risk to an aircraft, passenger aircraft personal, or property. For example: – ascites chemicals, paint, printing ink, satellite parts, vehicles, dry hye’s anything connected with automatic energy. Dangerous goods can be transported in regular or charter flights, but they need to be packed in a manner as specified by the Dangerous Goods Manual. Human organs The human eye is normally sent through and of the pilot, it is carried on gratis transportation on the national carrier. It is packed in the thermal coal packing without the lighting, without much of a delay after removing from the donor. Human remains

It is always carried in a coffin, in the cargo hold of the aircraft, the following certificates are mandatory for carrying the dead body.It should be accompanied by Death certificates issued by a registered medical practitioner or the hospital showing the cause for death.

Embalming certificates issued by hospitals that conduct embalming. Embalming is a process wherein the dead body can be kept for longer hours without getting decayed.

A hermetically sealed certificate issued by coffin makers should also be obtained.

Their arms processing license of the consigner.

Arms processing licenses of the consignee.

No objection certificate from DIG (and Above Ranking) of the destination and, NOC to be attached in original to the consignment.

Wet cargo shipments These shipments contain liquids or shipments by which their nature may produce liquids, which are not dangerous, shall be designated as cargo. The purpose is to prevent the spillage of any liquid in the aircraft. Air Mail

It refers to postal mail. One hour before the flight departure, the mailbag self-surrender to the airmail sorting office. From there it is brought to the airport terminal. The entire mail is passed through an X-ray for security. The number of mailbags, the weight, and the number of covers will be mentioned in the mail Airwaybill.

The following airmail documents specified by the Universal Postal Union conventions are used for transportation and accounting of airmail. They are :

Before the mail is accepted for transportation, The AV’s are signed as a receipt for acceptance. A check is carried out to verify whether the mailbags are correctly labeled and sealed. The damaged or torn bags are not to be used. The accompanying documents confirm the mail bags to be transported.

PalletPallet: Pallets is a flat metal surface with hooks on the sides, maximum weight a pallet can carry is 3640 Kgs. The height to which a pallet can be loaded is 64 inches or 162.6 cm. The hooks on the sides of the pallet are used to secure the goods formerly. To avoid any sort of tilting on board the aircraft.

The consignee or his agent may be identified personally by a responsible officer or staff. The arrived consignment note is entered in the sector-wise delivery register and the parcel is delivered against the signature of the consignee or is representative and issued with an odd pass.

There are different types of Rates on different kinds of charges collected for the dispatch of cargo. Every airline will have its own yardstick in fixing the rates and Tarif. Basically, cargo rates are based on the distance between two sectors, however, it differs in different circumstances.the different rates may include,

Normal Rate: it is the rate charged per kilo of cargo as published in cargo tariff guide of each airline for a sector. It is also known as the general commodities rate. Minimum Rate: It is the Minimum rate applicable irrespective of weight. Quantity Rate: It is used as a selling technique wherein more discount is given if the quantity booked increases. Class cargo rate. This is a rate applicable for the carriage of a specially designated class of cargo Specific commodity Rate. This is a discounted rate given for a specific commodity by airline for those products which are produced in that area and are exported from there. It is a promotional rate to encourage production. Valuation charge. It is an extra charge on the cargo when the value of goods is declared by the consigner. Volumetric charge, this is when the volume exceeds 6,000 sq. cm or 366 sp. inches. This figure is taken as the weight of the parcel against its gross weight. 4. AREA of complaints in cargo Human behavior: whenever a cargo staff behaves unreasonably, it irritates a customer, when a customer gets improper response or wrong information. It leads to complaints. Delayed Receipts of Cargo: Parcels are sent by Air due to the urgent nature. the parcel containing materials which are required immediately will be generally forwarded by air by paying much more freight than any other mode of transportation. When such parcels are delayed. It is natural that the customer will be unhappy and makes complaints. Short Receipt Parcel: When a customer books more than one piece of cargo in one consignment. Sometimes it happens that one or two persons receive shot at the destination. It is either left behind at the originating station or over carry it to some other destination due to negligence or oversight. Damaged condition: Due to bad handling, the chances of cargo getting damaged cannot be ruled out. This can also be a cause for complaint. Pilferage: Pilferage or theft can’t be ruled out in any organization, parcels are handled by several permanent and casual employees of the organization, and temptation makes to remove things from the parcels if any pilferage is noticed while taking delivery by the consignee, he makes the complaints. 5.History of air cargo History of air cargo

The transport of air cargo is closely connected to the history of commercial civil aviation. About a hundred years ago, no one had even dreamt that air cargo would one day assume such a significant role worldwide.

The American businessman, who in the fall of 1910 had approached the legendary flight pioneers, the Wright brothers to use one of their airplanes as a revolutionary and exclusive means to transport silk goods.

The successful history of air cargo began in 1910, with American businessmen quickly reached the agreement to transport the goods with the pioneers, though it was very expensive. Soon after this, the idea reached Germany that goods could be shipped in airplanes.

The first air cargo consignment was BERLINER MORGAN POST shipped from Berlin, Johannesthal to Frankfurt on 19th August 1911. On 10th July 1912, the first mail in Germany was flown by airplane.

The German air freight was founded in the year 1917. However, the first shipment of the newspaper from Berlin to Weimar was flown two years later. It went off as a great success immediately the German Postal Service interested its letters to German airfreight.

planes of the Times were particularly not fast compared to today’s standard. Then, the capacity available was around 40 kilos only. Still, they shipped a lot of emails within a short period of time. Traveling by air had been established as one of the most reliable means of travel. By 1926, German Lufthansa was formed and started transporting air cargo along with passengers in the very first year itself.

They carried around 56,000 passengers and 1926 tons of air cargo. In 1927, Lufthansaand the German national railway system entered into a marketing system where Lufthansa transported air cargo and its route network on German Railways took over the Freedom Service on the ground.

On 1st May 1926, Lufthansa started the first passenger night flight in the world. It was organized by a person named Hermann kohi and he became famous by 1928, because of his crossing of the Atlantic.

Another milestone in the history of air cargo was the first transoceanic flight service on 3rd February 1934. It provided transportation of airmail between Germany and South America. During World War Two. Technology improved tremendously and after the war.

The number of transport aircraft that belongs to the US Army was available for sale for a cheap price. Buyers wanted to go into the aviation business, acquired it. Airfare and free trade had become expensive, this resulted in some of the established freight and passenger airlines to come under pressure.

Modernization followed, starting with turbo propelled aircraft thereafter jet engines during 1948 and 1949. Emergency supplies to Berlin were airlifted during the blockade of the city, which was a historic event.

It took more than five years for Lufthansa cargo to build the cargo center at Frankfurt Airport. After two years of rigorous planning, it was completed in July 1976, known every carrier is looking for more and more cargo, especially after the introduction of widebody aircraft.

What you will learn

the international air cargo market is 40 billion dollars a year. Growth in air cargo is anticipated to exceed growth in passenger traffic in every major regional market.

The Boeing 1747 in its various configurations is the aircraft most commonly used as a cargo plane. Aircraft handling or ramp handling is a process of handling and unloading the aircraft. Skilled loading requires fast but safe operations so that neither fret nor aircraft is damaged. Training of operators and the use of appropriate loading equipment is required 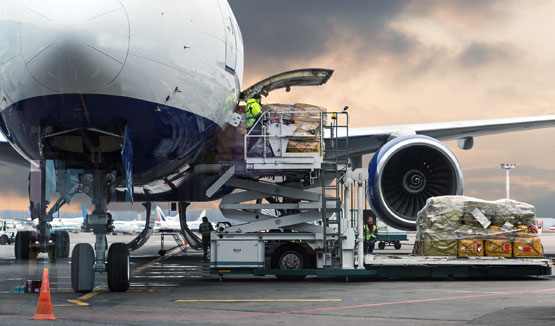